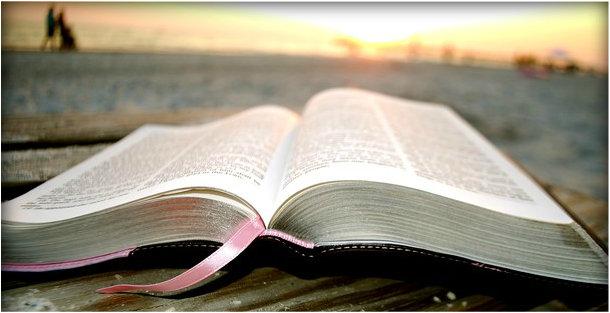 The Gospel of John is an often overlooked account of Jesus' life and ministry.  Mainly covering the teachings of Jesus' minstry rather than the miracles, John gets the heart of the matter and reveals the reason why Jesus came and the speical instructions He gave the disciples before He left.  It is a book written for both Jews and Gentiles urging all to believe in that Jesus is the Son of God.  As the Apostle John states at the end of the book:
"Now Jesus did many other signs in the presence of the disciples, which are not written in this book; but these are written so that you may believe that Jesus is the Christ, the Son of God, and that by believing you may have life in his name."
~John 20:30-31
Go to Study >> 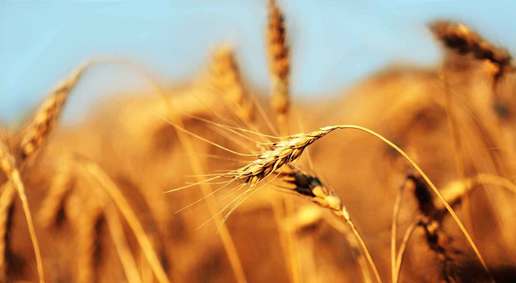 Set during the age of the judges, the book of Ruth gives an up close and personal look at how God transformed the tragic narrative of a family from Bethlehem into a story of redemption and hope.  From the beautiful illustration of the kinsman redeemer to the power of a life lived in faithfulness to the Lord, the book of Ruth teaches us many important truths and lessons applicable to our era.  So join me as we travel across time and space to visit an ancient barley field and there discover the remarkable story of a young Moabitess named Ruth.
“But Ruth said, ‘Do not urge me to leave you or to return from following you. For where you go I will go, and where you lodge I will lodge. Your people shall be my people, and your God my God.’”
~Ruth 1:16
Go to Study >> 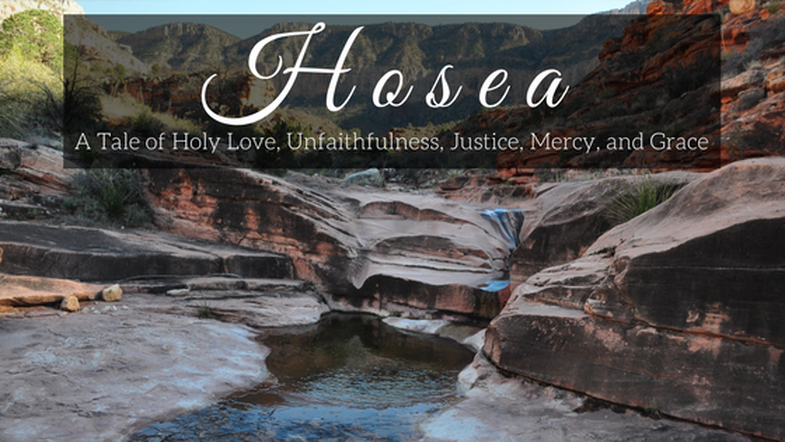 ​This is a tragic love story between a faithful, righteous man and his adulterous wife.  But who are these two people?  At first glance it would appear to be Hosea and his wayward wife Gomer; however, upon closer inspection we discover that this book is actually about the LORD and His people Israel.

Chosen and set apart by God as a special people and bound in a covenant relationship to Him, Israel willfully chose to forsake her God, break their covenant relationship, and commit spiritual adultery with foreign gods.  This tragic tale was vividly depicted and lived out through the broken marriage of Hosea and Gomer during the final days of the Northern Kingdom of Israel.  However, just as God called Hosea to redeem his wife and love her unconditionally, so also God promises to faithfully love and rescue His chosen people.  This is the beauty of the book of Hosea, that even in the midst of unfaithfulness, adultery, and waywardness God continues to unrelentingly pursue and love.

So join me as we watch the marital struggles of Hosea, compare our own hearts with the wandering Gomer, and experience the painful discipline of the Lord while also seeing His incomparably great love for us.
“Come, let us return to the LORD; for he has torn us, that he may heal us; he has struck us down, and he will bind us up.”
~Hosea 6:1

“Sow for yourselves righteousness; reap steadfast love; break up your fallow ground,
​for it is the time to seek the LORD, that he may come and rain righteousness upon you.”
~Hosea 10:12​
Go to Study >> 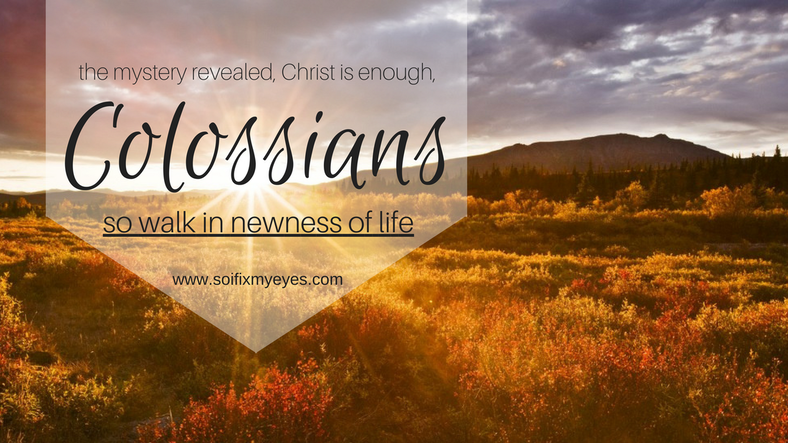 ​One of Paul’s Prison Epistles, Colossians was written to the believers located in the region of Colossae, a group of people Paul had never met.  It was written to encourage the believers and dispute the lies that were infiltrating the church—lies that Christ was not enough.  So Paul sent them a power-packed letter filled with invaluable doctrine and life-giving truth.

At the time of its writing (circa A.D. 60), the Colossian Christians were battling with what is now known as the Colossae Heresy.  False teachers were coming into the church underneath the title of “Christian” and adding to the gospel, declaring that there were certain “secrets” or “mysteries” that had only been revealed to them.  In a day and age when all other religions had many layers or secret mysteries, this would have seemed plausible to the early church at Colossae.  But when Paul caught wind of what was happening, he was quick to remind them of the truth and to explain that the mystery or secret had already been revealed through Jesus Christ.  He warned them to not become so easily deceived by the teachings of man but to rather grow in Christ and in the knowledge of Him.

While Colossians was written centuries ago, it remains relevant and holds many truths and applications for us today.  We might not be confronted with issues such as Gnosticism or the Colossae Heresy, but there are other false doctrines and teachers out there trying to inject lies into the church.  Our culture and society is saturated with false teachings and lies, and they are doing their best to share those lies and indoctrinate all who might be swayed from the truth.  So Paul’s first century letter to the Colossians and warning against being taken captive in thought and philosophy rings true now more than ever.

Join me as we dive into the book of Colossians and discover how we can live out, take hold of, and apply its message, which could be summarized as:  the mystery revealed, Christ is enough, so walk in newness of life.  May this life-giving and power-packed epistle give your spiritual life and mindset a whole new perspective!  From the awesomeness of who Jesus was and is and what He’s done for us to the nitty-gritty of everyday life and how we should live it as followers of Christ, this book has something for everyone.  So let’s get started!
“See to it that no one takes you captive by philosophy and empty deceit, according to human tradition, according to the elemental spirits of the world and not according to Christ.  For in him the whole fullness of deity dwells bodily, and you have been filled in him, who is the head of all rule and authority.”
~Colossians 2:8-10

“The mystery hidden for ages and generation but now revealed to his saints.  To them God chose to make known how great among the Gentiles are the riches of the glory of this mystery, which is Christ in you, the hope of glory.  Him we proclaim, warning everyone and teaching everyone with all wisdom, that we may present everyone mature in Christ.”
~Colossians 1:26-28
Go to Study >> 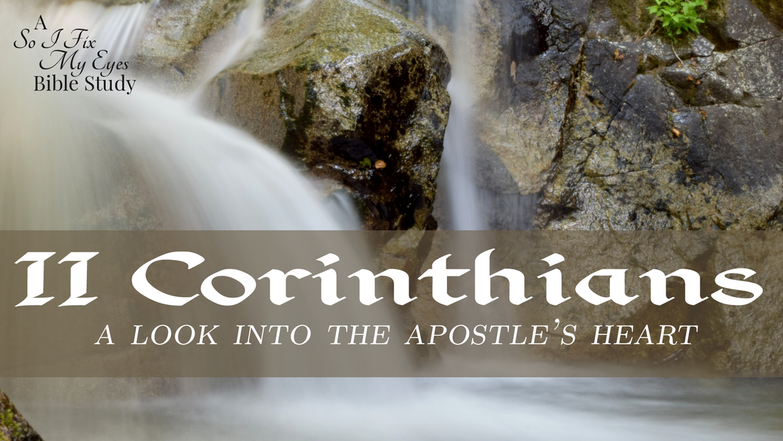 ​Have you ever wanted an up close and personal look at the Apostle Paul?  Did you ever ponder what passions, concerns, and apprehensions filled his heart and what drove his long and self-less ministry through the fiery trials of persecution and eventual martyrdom?  Outside of the role of scholar, doctrine creator, and church planter, what was Paul like?

We’re going to try and find answers for these questions in one of Paul’s most personal letters that are now canonized in Scripture:  II Corinthians.  Written to a young church located in one of the most immoral cities within the world at that time, II Corinthians contains so many snapshots of Paul and his heart for God’s people.

It’s not a letter loaded with deep theological doctrine or heresy disputing advice, but it’s a personal letter from a spiritual father to his struggling spiritual children.  It’s a letter of comfort, encouragement, exhortation, and most of all love.  It’s a letter born out of many sleepless nights and worry on Paul’s end as he took full responsibility for the spiritual health of this young church.  So while II Corinthians may be the most scattered and least systematic of Paul’s letters, it contains a level of rawness, deep sincerity and urgency, and heart-to-heart openness not found in other letters.

So join me in delving into this deeply personal book, and together let’s see what we can learn from taking a closer look and study at the great Apostle Paul’s caring heart.
“We have spoken freely to you, Corinthians; our heart is wide open.  You are not restricted by us, but you are restricted in your own affections.  In return (I speak as to children) widen your hearts also.”
~II Corinthians 6:11-13
Go to Study >> 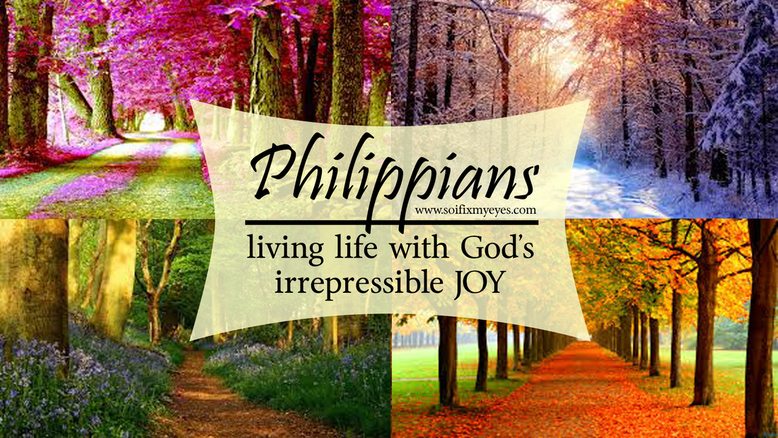 Joy is an important characteristic of a Christian.  It’s the second fruit of the Spirit following closely after love.  We desperately need it, for with joy, life becomes an adventure with God, but without it, life’s a nightmare.  But beware, joy is not the same as happiness.  Happiness is as fleeting as the seasons; it’s here today but gone tomorrow.  However, joy endures.  It endures hardship, trials, persecution, as well as blessing and prosperity.  Joy is constant and not dependent upon circumstances to keep it going.

So now the question is:  how do we get joy?  We know its importance and benefit, but how can we obtain it?

There’s no simple, short answer.  In fact, Paul wrote an entire epistle centered on this topic.  The book of Philippians contains over 10 mentions of joy and rejoice in its short four chapters and 104 verses.  So as we wrestle with the question of joy and how to obtain it, let’s go find our answers in this treasure-packed book.

Our next So I Fix My Eyes Bible study will be through the Epistle of Philippians.  We’ll discover how Paul was able to write declarations like “For to me to live is Christ and to die is gain,” “I count everything as loss compared to the surpassing worth of knowing Christ Jesus,” and “I have learned the secret of being content in any and every situation.”

These phrases have inspired generations of believers and spurred on and motivated countless Christians into deeper places with the Lord.  Therefore, join me in methodically and devotionally discovering the book of Philippians and all that the Lord has to show us in this gem of a book.
"But whatever gain I had, I counted as loss for the sake of Christ.  Indeed, I count everything as loss because of the surpassing worth of knowing Christ Jesus my Lord. For his sake I have suffered the loss of all things and count them as rubbish, in order that I may gain Christ."
~Philippians 3:7-8

"I am not saying this because I am in need, for I have learned to be content whatever the circumstances.  I know what it is to be in need, and I know what it is to have plenty.  I have learned the secret of being content in any and every situation, whether well fed or hungry, whether living in plenty or in want. "
~Philippians 4:11-12
Go to Study >> 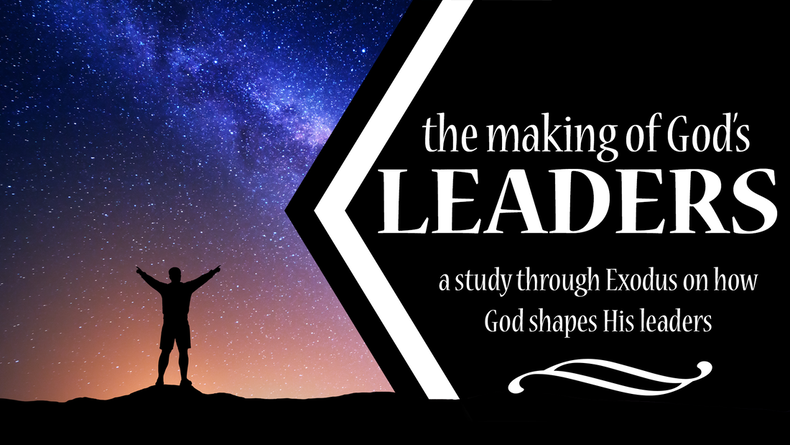 When you first think of the book of Exodus, what comes to mind?


There are so many displays of God’s glory and power in this lengthy book!  From the rescue of Moses out of the Nile to the Ten Plagues of Egypt and the glory of God on Mount Sinai.  Ultimately, this book is about the LORD and His greatness.  And during our study, we must not lose sight of that fact.  However, we’re going to focus on the other main character of this narrative—Moses.

Some may have said he was born at the wrong time in history.  If it were not for the bravery of his mother, he would have been killed.  However, God had a plan for his life and rescued him as an infant and continued to guide and direct the course of Moses’ life, ultimately leading him to the pinnacle moment on Mount Sinai when Moses was able to behold God’s glory.

What an awesome moment that must have been!

Therefore, let’s follow in Moses’ footstep and walk with him through the pages of Exodus, watching how God works in his life and learning from his mistakes.  Why?  So that by the grace of God and for His glory we may become mighty spiritual leaders for our generation.
Go to Study >>